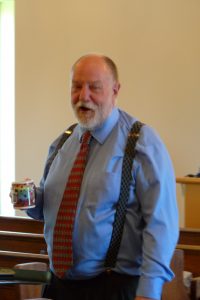 John Ferguson was born and raised in London, Ontario. In his early twenties John was visiting Ottawa where he attended a worship service of the Reformed Presbyterian Church of North America. The Lord graciously converted him through the preaching and reading of the Word. Several months later John moved to Ottawa to begin studies at the Ottawa Theological Hall. Later that year John married Lori and God subsequently blessed their union with four children.

In 1997 John was ordained as an elder in the Orthodox Presbyterian Church in St. Thomas, Ontario. Later that year he was taken under care of the Midwest Presbytery, which licensed him to preach the Gospel in 1998. In January of 2000 at the inaugural meeting of the new presbytery, the Presbytery of Michigan and Ontario examined John for ordination. On March 21, 2000 John Ferguson became the first Canadian Orthodox Presbyterian minister to be ordained in Ontario for ministry in Canada.

Since 1997 John has been working with the mission work of Covenant OPC. When the congregation was organized in February 2002 he was installed as their pastor. John currently serves as the moderator of the Presbytery of Michigan and Ontario.